It’s amazing how a small problem can manifest itself into a major problem. Sometimes, it’s the fault of the product/part and sometimes the fault of an inexperienced mechanic as in this case.

After servicing my little old 1958 Singer, i.e. new oil and filters etc the car developed a major problem. It would run perfectly and then suddenly lose all power and the electric pump would go wild because it was short of petrol. I would then wait a while so the pump could catch-up and fill the carburettor. This you will appreciate really inhibits one’s progress i.e 5 kilos in 30 minutes!

I started by replacing the electric fuel pump, no difference, then using a compressor blew the fuel line out – no obvious blockages.  Drained the petrol tank and removed the fuel gauge situated at the top of the tank in the boot so I could look inside to see if there was any junk – clean as a whistle. 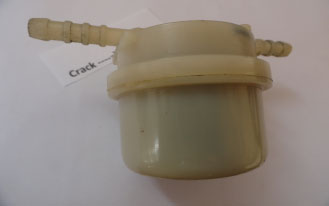 The problem had to be somewhere in the pipe from the tank to electric pump situated under the bonnet.  I replaced a large section of the fuel line, no better. The pump still went wild. Then in desperation I sucked on the petrol pipe going to the pump and ended up with a mouth full of 95 grade petrol – not nice!!!

Then a friend came around who is far more knowledgeable than I’ll ever be so I had to listen to his suggestions. For some unknown reason he went straight to the new fuel filter, wriggled it then sucked on it, and announced that was the problem. There was a hair line crack and  it was sucking air.  I fitted another filter and – voila!  Problem solved.

Two days and R700.00 later the problem turned out to be the R20.00 fuel filter. The question why?  To be honest I can’t blame the filter as I could have been rough fitting it. My

suggestion is to be careful when fitting them as they are made of plastic and could be damaged if miss-handled.  Also, don’t buy the inexpensive no name brands.   Attached is a picture of the offending filter.

Some time back a friend was boasting that his oldie never used oil.  No amount of persuasion could convince him that that particular engine had to use oil otherwise it would die a premature death. Looking at the dip stick he was right it was full to the top mark and even beyond but the smell of the oil confirmed the problem was that the sump wasn’t full of oil but a high percentage of petrol was added.

I was recently reminded of this when looking at a weekly episode on cars by John Cadogan, the Australian chap who has a weekly programme on some technical issue or the other. By the way, if you want a bit of free entertainment look him up on Google. This particular episode was about the necessity of changing oils in modern cars at the intervals prescribed by the manufacturer and the consequences if you don’t.

Although he was referring to modern engines I think his advice is even more applicable to our oldies. Older cars fitted with carburettors tend to over fuel at the best of times especially when cold. Years back I recall that it was imperative to change on the dot  every 1000 miles.

Cadogan rightly points out that we so often use our cars for short trips resulting in the engines taking too long to warm up to the correct operating temperature with the result that the unburned fuel ends up flooding down the pistons and mixing with the oil seriously reducing the oils viscosity.  We are also reminded that petrol is not a very good lubricant.

The answer – play safe and change the oil at regular intervals. Yes, it’s getting expensive but still a lot cheaper than a premature engine rebuild.

A cheap way to de-rust your tools

I had noticed over the years that many of my spanners and other tools have developed a light coating of rust, particularly those that are less frequently used and therefore do not have the protective coating imparted by greasy hands.

Those who have done restorations are probably familiar with phosphoric acid which is a really great de-rusting agent, but phosphoric acid is not freely available and, like all acids, needs to be managed carefully. I found a tip that I have just used to restore all my spanners to sparkling as new condition that I thought to share with our members. It is easy and inexpensive.

Place the rusty tools in a plastic container wide and deep enough to be able to immerse them. I suggest not to use your wife’s best Tupperware container as you may not be able to clean it satisfactorily afterwards. Pour a couple of bottles of ordinary spirit vinegar, that you can purchase from any supermarket, into the container in order to cover the tools, and leave overnight. You may find the next morning that the don’t look any different but you will need to brush off the rust which will come away easily with a fine wire brush or even an old toothbrush. The rust brushes off easily and you will be left with a clean spanner or tool. Now neutralise the acid by immersing the tools in water in which you have dissolved a few tablespoons of bicarbonate of soda and, hey presto, they will be suitable for showcasing in your workshop.  I suggest to wipe the tools with an oily rag to add a layer of protection or, as I did, drop them in a container of diesel before wiping them clean for use.