HEALEY FOR THE ROAD OR WATER

By Trevor Holland- our retired Austin man from snowbound Austria

The  link between Healey as a performance car or boat took me back to my youth and holidays in Cornwall learning how to water ski being pulled along by a Healey speed boat. Donald Healey sports cars are well known and documented but his other company — Donald Healey Marine  — building speed boats on a commercial basis is less well known . This company was set up in the mid 1950’s ; initially building outboard engined boats and then on to inboard engined boats  . The company closed down in 1961 after building approx. 1750 boats including trailers .The actual number is not very well documented as record keeping was not computerised in those days.

Some boats of interest that were produced:

Healey 707  — powered by a 2912 cc big Healey engine  .. This boat was propelled by a Dowty Marine Jet Drive rather than a propeller . 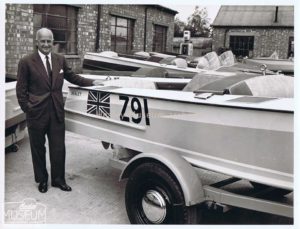 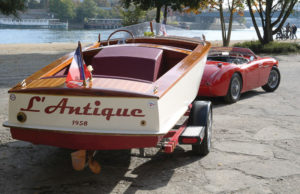 Donald Healey with one of his boats

South Africa had links with Healey cars because some were built in the Blackheath Factory .