The Triumph TR 4 celebrates its 40 th anniversary this year. The TR4 was received with much praise when it debuted in August of 1961; featuring items such as winding windows, face level cockpit ventilation, and an all-synchromesh transmission also received high marks from the motoring press.  The fixed rear window with a removable centre section, known as a “Surrey top”, was available as an option pre-dating Porsche’s “Targa” roof. Triumph owed much to Michelotti for his many successful designs, and it is worth reflecting on this remarkable car designer’s life.

Like many sons following in their father’s footsteps, Giovanni Michelotti, born in Torino in 1921, seemed destined to follow in his. At the time of his birth, the elder Michelotti was already a machine shop manager at the Torino-based carmaker Itala’s engine factory, so it seems little coincidence that the younger Michelotti would come to develop a deep love of all things mechanical, especially cars.

Leaving school at just fifteen-years-old, Michelotti garnered his first experience in the automotive industry as an apprentice at the Stabilimenti Farina in Cambiano, just outside his hometown. If that name seems familiar, it is because the nascent design house, and the best car-design “school” existing at the time, was started by the older brother of Battista “Pinin” Farina. Today the firm is called Pininfarina S.p.A, and still in operation. It was there that Michelotti’s talent was nurtured, if not recognized at first. In this golden age of coach building, and just two years into his apprenticeship, Michelotti’s first credited design was a body design for a Lancia Astura, in 1938. The project, however, was not meant to be, and never put into production. Michelotti continued to churn out sketches, though. It would be a little while, but Farina would eventually put Michelotti’s designs for a re-bodied 1947 Alfa Romeo 6C 2500 into production, and soon thereafter a series of designs based on the Talbot T-26. The success of having cars derived from his work was the motivation that Michelotti needed to strike out on his own. He would establish his own studio, Studio Technico e Carrozzeria G. Michelotti, Torino in 1949.

Michelotti would continue to work freelance for several Italian Carrozzerias, including Bertone, Ghia, Allemano, and Vignale. His first commission as an independent designer was a body for a variant based on the Ferrari 166, which would become just the first of many Ferraris he penned throughout his career. Throughout the 1950s, he would work on designs for Maserati, Lancia, and Alfa Romeo as well. Bodies for the Ferrari 212 Inter, Ferrari 340 Mexico Coupe, Maserati 3500GT, Lancia Aurelia, and Alfa Romeo Giulietta Sprint Veloce would flow from his hand, and oh, what a hand it was. While Michelotti is now considered the father of freelance car design, it is also said that he would create the first sketches in one day and night only working with his pencils.

Michelotti’s career would take an interesting turn toward the end of the ’50s, as he essentially became the in house designer for British carmaker, Standard Triumph. This came about when he penned a proposal to shape the 1956 Standard Vanguard, a sedan design that represented a total break with Standard’s conservatively designed cars. And so, from the late 1950s Michelotti was responsible for all the new models produced by Standard Triumph, starting with the Standard Vanguard and going on through models such as the Herald, Spitfire, GT6, TR4, and TR4A, TR5, 2000 series saloons and the FWD 1300 saloon. Later the Triumph Stag and Dolomite saloon would be added to the list.- nothing like a bit of Italian panache to spice up a staid British manufacturer, right?. He also designed the beautiful Triumph Italia coupe built between 1959 and 1962 by an Italian company around TR mechanicals. 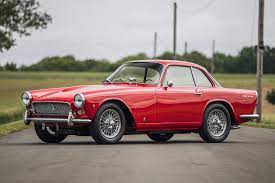 Michelotti also made big contributions at BMW too–the BMW 700, the “New Class” BMW 1600-2, and, later, the now highly-collectable 2002. A pagoda-style roof added to an OSCA study later ended up gracing the Mercedes–Benz SL class. The Japanese manufacturers contracted him to draw up the Hino Contessa and Daihatsu Sport during the 1960s. Other customers for Michelotti’s work included DAF, Fiat, and Ford, but he also found some spare time to produce a few cars under its own name. One of the few was the “Shellette”, a beach car with wicker seats and dashboard, like the Fiat Jolly.

Michelotti is credited with more than 1,200 designs–cars, and even buses and trucks–where at least one model was produced. The quality, quantity, and breadth of his work are just some of the reasons why he was inducted into the European Automotive Hall of Fame in 2009. Over the years, Michelotti declined numerous offers to join other coachbuilders because he was valued his independence as a freelancer, and the varied challenges they allowed. Michelotti passed away too soon in 1980, at the age of just 59. Carrozzeria Michelotti closed its doors in 1993.

Michelotti’s name has always been associated with Triumph and many may not know that, during his long association with Vignale, he was asked to build an MG TD based special. This vehicle resembled the Ferrari grand touring cars and featured a body fashioned from aluminium. The styling featured many later Vignale cues and provided an interior that would have shamed many luxury cars of the day with intricate wood veneer.  Despite an excessive amount of chrome, the alloy body made the car only slightly heavier than stock and the performance was consistent with other similar cars of the day. The car still exists today.