The formation of the Garden Route Club by Ricky Cooper

In the early 80’s there were a few chaps owning classic cars in Knysna. After some investigation we made contact with a newly formed Club in Plettenberg Bay called the Plett Classic Car Club where I met people like Neville Mayhew and Boet Keet.

The meetings were very casual at first with Sunday drives and a few braais. This continued for about two and a half years with Knysna members growing and Plett members falling by the wayside. It was agreed upon that Knysna should become the official headquarters and that we would run the Club with a change in Club names.

Mike Roumanoff  had just retired to Knysna with 16 of his classic cars and a  lot of knowledge of how clubs affiliated to S.A.V.V.A. should be run. This was very important as a number of members were keen in taking part in rallies. Mike’s close friend at the time was Sheridan Renfield who was Chairman of the Piston Ring Club in Johannesburg.

After about two years with Mike as Chairman, we were informed that we had progressed far enough and large enough to stand on our own feet. A Special Meeting was called and the name changed to the Garden Route Motor Club.

Mike was still Chairman, but only for a couple of years. Boet Keet was elected as the new Chairman and the Club grew from strength to strength. Don Steenkamp took over from Boet and still the Club grew to what we have today with our (Then) present Chairman, Bunny Mentz.

I stand to be corrected but myself and Neville Mayhew are the only surviving members of the original Club in Plettenberg Bay.

My interest in the Old Car movement began when I was still very young, to the degree that, together with my friend Gordon Stewart, we became member’s of the V V C ( Vintage & Veteran Car Club Movement ) in 1961. Our friendship is as important now as our affiliation to this proud and successful club and the pleasure of meeting our fellow members, one of who happened to be Boet Keet. His pride was a 1912 Swift, a real beauty, mine a humble little Austin 7, which I proudly introduced and which I still own. In 1988 my wife & I took the decision to relocate to the Cape, we weren’t too sure of the exact location at this stage.   We duly sold our home to Hospice, on the East Rand.    The manager of Hospice offered us his property in Plettenberg Bay for an indefinite term. That sorted out the destination for us. We packed up our home and all our belongings and headed into the unknown.    Our entourage left Johannesburg in the wee hours of Friday the 13th May (eish!). Take my advice ‐  never travel on that day and date! I headed the great trek, driving my Cortina Bakkie and towing a trailer packed to capacity. Jean followed in the Jag. The passengers included our two dogs, my African Grey Parrot, our helper, a young Zulu man, all my tools and machines etc., (we couldn’t find the cat – it had disappeared when the packers came to load up the furniture. Gordon, bless him, undertook to keep an eye out for it and he would bring her at a later stage. That is another story) All went well and we were close to Uitenhage by late afternoon.  I was in front, very pleased with the way things were going until I realized there was no Jag at the rear. Doing an about turn, I retraced my route to find a very distressed wife, a squawking parrot, very restless dogs and a nervous young black man trying to be helpful with something he knew nothing about. An inspection proved that this car was going nowhere under its own steam. A much later inspection proved that the car had dropped a valve right through the piston.    Being very resourceful, ahem, we attached the trailer to the Jag, the Jag to the bakkie and towed the lot to Uitenhage into the first Service Station we came to. It was dusk by now and the garage had already closed its doors. The owner very kindly commiserated with us and agreed to house the Jag until we could return to collect it. We loaded as much as we could out of the car onto the bakkie.  Found a spot for the dogs and our helper and with the parrot on my shoulder, Jean & I continued our journey to Plett.   So began the start of a new life in the most idyllic setting. The furniture arrived the next morning; the rest of my cars a week later and Gordon arrived with the cat and my Westminster.   We soon settled down, finding life on a farm very challenging but most enjoyable. We also began to find the time to begin exploring this beautiful area.

A pattern developed. Shopping was done on a Saturday. One Saturday I decided to do our shopping trip (the weather was perfect) using the Austin 7.  The Fire Station is situated in Marine Drive, the main entrance into the town. To our delight, festivities of some sort were in progress at the Fire Station with the local population gathered and milling around on the surrounding grounds. On closer investigation it proved to be a car show. We were spotted and invited to join in. Of course, I met like‐minded locals. Their club was officially known as The Plettenberg Bay Classic Car Club. Annual Membership Fee was R10.00 and when it was necessary we would just top up the float. The members I recall were: Keith Burton ‐ Citroen, Billy Oosthuizen with 2 MGA’s, John Amm – E Type Jag, XK150. Dr Peter Honeywell  ‐  MK11 Jag & Sunbeam Alpine. Maurice Robin, (can’t remember car) John Wade ex Rhodesian – BMW, Mark Rupert ‐ Super 7.  Johnny van Woerkom, he was the chairman  ‐  Truimph Spitfire. Les Williams  ‐  Rolls & Valiant. Chris Minaar  ‐  Rolls & Ferrari. Barry Lightley ‐ Jag 420. Ricky Cooper ‐ MGA & Healey. I have fond memories of our first run with the team.    Keith, who is so knowledgeable on the history of the area took us on a very informative and enjoyable tour of The Crags.  The year‐end was celebrated with a Prawn Party and of course plenty of beer & wine, good cheer and fun. The club began to take on a more formal format with regular meetings and a drive to attract more members. We then hit a bumpy patch, Johnny & his wife Barbara resigned and re‐located to Cape Town. John Wade took over the reigns but unfortunately, (he was a paraplegic) he found it too much. The runs faded off and the club began to take a dip. John resigned and immigrated to England. Boet volunteered to take over the wheel and steer our club.    A weekend at Storms River was planned where a fully functional meeting was held and a new club formed under the banner of the Garden Route Club. At about this time Gordon joined as a country member. By this stage we were very pleased to have amongst our members Mike Roumanoff with all his expertise plus quite a few new members like the late Bernd Henschel, swelling the ranks. We now had +/‐ 90 members and we enjoyed many challenging and very popular runs and meets.

Knysna, by now had become a very strong arm in the club and the vehicles we sported very diversified & interesting.   To participate in major rallies we had to obtain the recognition of SAVVA. We needed a recognized club to piggyback us through the process and Mike was able to achieve this through his connection with Sherry Renfield. The Piston Ring Club became our conduit and once all formalities were successfully concluded we became known as The Piston Ring Garden Route Club. Mike was free now to organize some super, very successful rallies much enjoyed by all participants.   Our club grew both in numbers and stature. We were once more on the highway and loving it, but of course, not without some deviations. We had another name change, as it was unanimously agreed the name was too long. Our new identity was now known as G R M C (Garden Route Motor Club). To add to our woes, a few personality clashes, Mike and Robin resigned to join the George Club. Our club survived this crash and continued to grow.

New and long standing members the likes of Don and Joan Steenkamp Lionel and Rose Hewitt, Ricky Cooper etc., continued to steer our club to new challenges and heights. An exciting and stimulating force to be part of and hopefully to continue for years to come. Neville Mayhew

Snippets from the early days by Margeret Parkes

Knysna’s first car was a Benz, ordered for Mr. Harden of the Standard Bank by a Mr. Weeks of Coote, Noble & Co. (where Russell’s store is today). It was assembled with the help of the handbook in 1906. Mr. Weeks himself bought himself a car from the USA – a Delahaye.

The first Model T Ford in Knysna was ordered by a Mr. Thesen and arrived on his ship the S. S.”Agnar”. 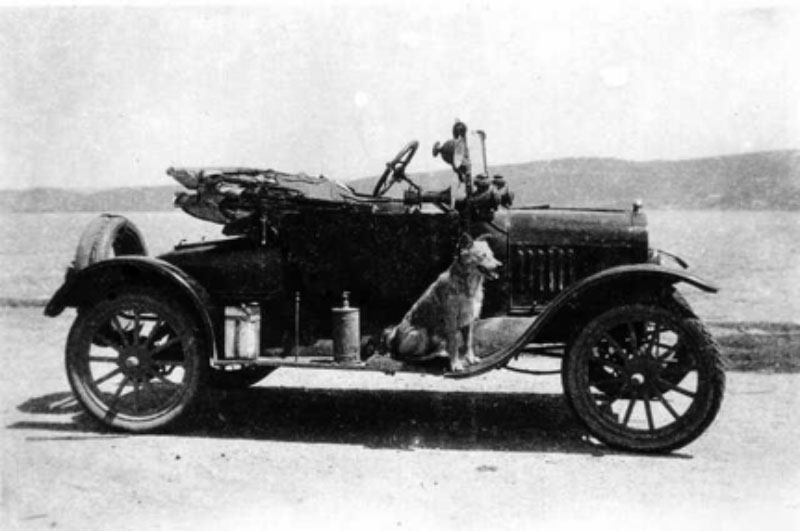 In November 12912, the arrival of Mr. Wotton’s Overland brought the total number of cars in Knysna to 12. It is recorded that the more powerful car at the time belonged to Mr. Horn, who owned the Royal Hotel. The make is not known, but it packed a whopping 22 h.p.! The first garage in town was located where the carwash behind Pick & Pay is today. 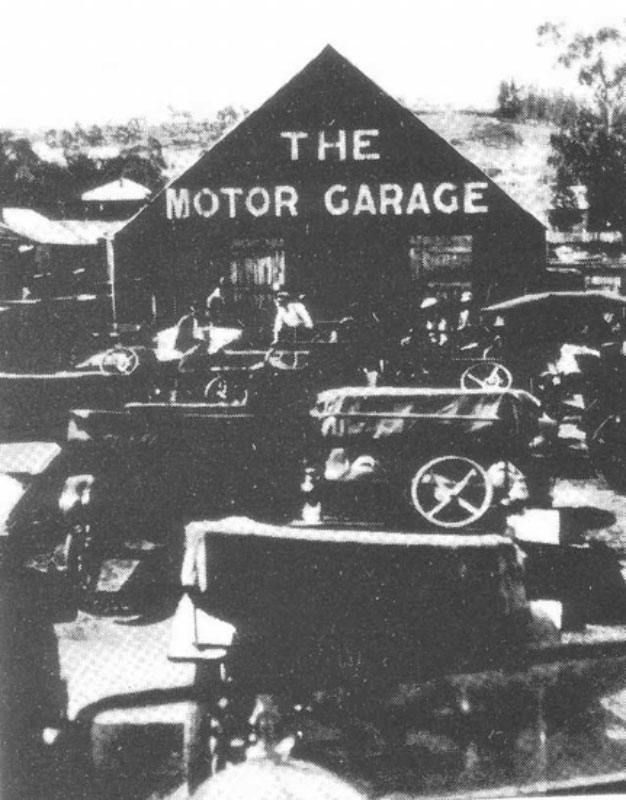 Magistrate Mr. A.G. Smidt (who founded the Knysna Yacht Club) drove a Standard, and Dr. Haw a Swift. There were Napiers and Humbers too and Lilly Basson caused a stir when she arrived in a cloud of smoke and dust at a Duthie garden party at Belvidere Manor in her new Cadillac. A Darracq was delivered from the quayside to the town on the old ‘Coffee Pot’ logging train and a car service was operated between Knysna and George using Hupmobiles, but with frequent delays at Bernard’s Drift in Rheenendal 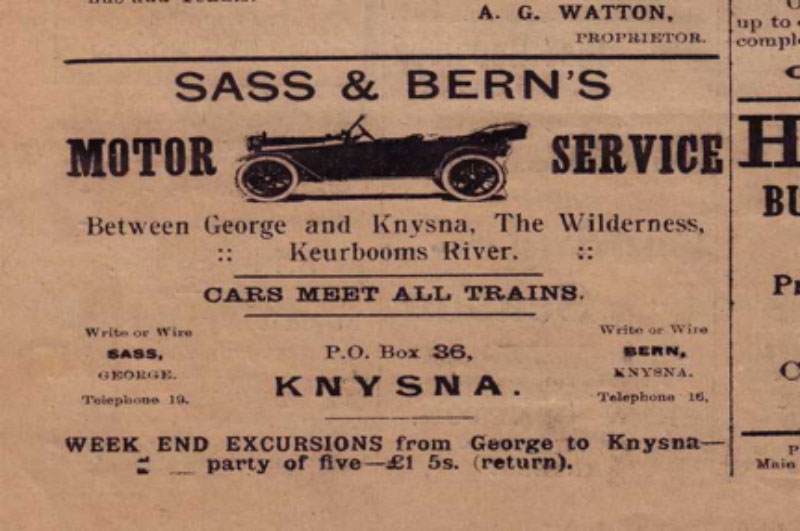 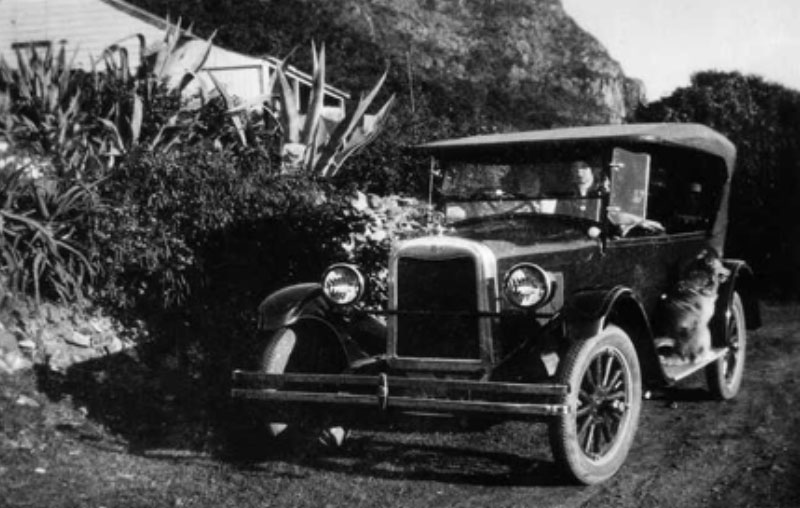 By 1932 there were 400 cars registered in Knysna. In September 1393 a Mr. Colin Cloete drove most of the day and through the night from Johannesburg to Knysna in a record 22 hours and 20 minutes! Crossing the Knysna River in the beginning was over Oudrift – the old wagon crossing. A wooden bridge was built in 1893, followed by a concrete bridge in 1915, which had a very short life. Ot was washed away the following year! The pontoon was used until the steel ‘red’ bridge was completed in 1923. This served Knysna until the current ‘white’ bridge was commissioned in 1987.

The GRMC is indebted to Knynsa historian Mrs. Margaret Parkes for the above.