The month of May seems to have been characterised by cloudy and cool, if not dismal, weather but on Mother’s Day the combined clubs outing to a west coast style beach restaurant took place in perfect open top weather. A total of 20 beautiful classic cars motored down the N2 to the coast at Groot Brak. Die Vette Mossel just seemed to set the tone for a long afternoon of eating and relaxing. It is rustic to say the least with many amusing signs and,  being situated on the beach, encouraged one to kick off your shoes and wriggle the toes in the sand.

A total of nine different dishes were served, all grilled on the fires, or prepared in traditional potjies. Although not inexpensive, the restaurant encouraged everyone to eat as much as they wanted and stretch out the afternoon as you gazed out over the beach and waves. Starters consisted of mussels served in the shells as well as a potjie of delicious muscle meat in a spicy peri-peri sauce, into which it was impossible to resist dipping the farm style bread. Braaied traditional Snoek and Yellowtail, Calamari steaks were delicious as were a mixed seafood potjie, vegetables and salads. There was even a thoughtful meat potjie to cater for those who were not keen on the seafood.  Everyone seemed to enjoy the afternoon and there were suggestions that this should become an annual event. 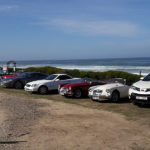 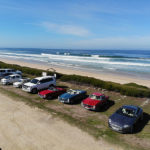 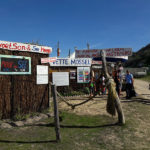 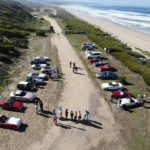 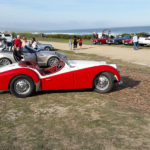 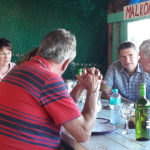 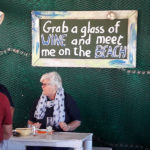 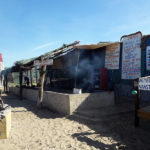 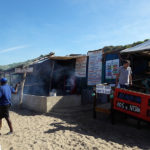 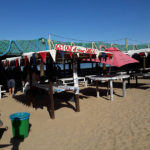 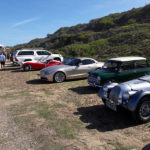 Last night of the proms

This was a real treat for us as first timers at the Feather Market Hall which opened in February 1885.

acoustics, which just enhances the amazing performance from The Eastern Cape Philharmonic Orchestra directed by Richard Cock. We were entertained by guitarist James Grace whose guitar playing was just breath taking.

Erin Beck, a 15-year-old student from Pretoria, blew us away with her soprano voice so controlled and powerful, that it seemed impossible to be coming from such a young girl. The baritone was performed by Bongani Kubheka, who sang arias from popular operas making the audience gasp. Spanish dancers performed with flamboyance, grace and passion. I personally did not know that the Can Can originated in Spain and these ladies danced it as never seen before.

We were piped back into the hall after interval by the Algoa Caledonian Pipe Band and what a joy to see young primary school age children piping so well.

The audience participation made the evening, and the finale’ was thrilling with Land of Hope and Glory words changed to – “Land of many splendors where we can be free – All standing together in diversity- Let us build this nation working side by side – For a brighter future for all nationwide”.

I think that says it all – Getting to know GRMC folks, and a well-organized weekend, made this a must repeat for us next year when they celebrate 100 years since the 1820 Settlers arrived.

We ate the Karoo- our weekend in Prince Albert

A weekend in the beautiful Karoo town of Prince Albert in midsummer seems to be just what our members wanted. Peter P had to close the bookings once we had 71 takers!

Perhaps it was not just about driving out in the Classic but the added attraction of motoring top down through the majestic and beautiful Meringspoort into the Karoo? With such a large group; smaller contingents formed up while some went directly to our end destination. The weather on Friday for our trip could hardly have been better for top down motoring. Whilst nice and warm, extensive cloud cover kept the sun from frying one’s brains. Compared to last year there were many more classic cars which attracted much attention in sleepy Prince Albert, surrounded as it is by Olive, fig and grape farms.

Peter had chosen to stop for our lunch in Klaarstroom, just after exiting the Meiringspoort. Most people who travel between Beaufort West and Oudtshoorn through Meiringspoort miss this little hamlet which is truly a place that time has forgotten. In days gone bye it was the centre for washing of wool destined for shipping from Mossel Bay. The Klaarstroom hotel was soon bulging at the seams as all of the group arrived more or less simultaneously and headed for the patio and garden with their choice of tipple from the bar and sounds of loud chatter and laughter set the tone for the weekend. Our hosts served a choice of delicious home baked Chicken or Karoo lamb pie with a selection of salads.

What else should a weekend away be other than congenial company and lots of eating and drinking? Our dinner, after settling in, was enjoyed on the stoep of the grand old Swartberg Hotel where starters included Ostrich Carpaccio and Karoo lamb so wonderfully tender featured in a spicy and tasty Curry.

Although Pieter Dirk Uys had shows on both nights in the lovely Art Deco “showroom theatre” we had chosen to attend only the PD Uys story “say Darling” on the Friday night but most took in both shows. I can’t say anything about the Evita show on the Saturday but the Friday nights show was quite enjoyable. Pieter Dirk narrated his journey as a notorious satirist and how he came to live in Darling by taking a wrong turn. There were some funny stories about Darling and also some about how he has helped both the community and individuals. He then dug into his cardboard boxes, which you will know, hold his costumes and entertained the audience with a number of impersonations, some hilariously funny. I personally thought, however, that 40 years or so on, impersonations of Nationalist Government minister Piet Koorhof and former Prime Minister Piet Botha , no matter how well done are no longer either interesting or relevant. The send up of (former president) Jacob Zuma was excellent but I could not help notice that he seemed to steer clear of current politicians who have provided many other comedians and satirists with plenty of material!

Plenty of leisure time had been provided on the Saturday for people to relax or explore the village and after breakfast our members seemed to fill the little country market on the main road. Best find at the market had to be plump and perfectly ripe Prince Albert figs, although many seemed to find books and handicrafts to take home.

In the mid-morning a visit to local handicraft industry Avoova had been arranged. This innovative workshop and showroom offers exquisite African homeware, jewellery and trinkets made with crushed and cracked Ostrich eggs, polished to perfection and set in coloured cement with local and imported woods. Such a description cannot, however, do justice to the sheer beauty of their products.

Soon it was time to eat again and, braving a corrugated gravel road, the group repaired to the O for olive farm and its rustic restaurant set in a pretty garden and overlooking the groves of Olive trees. The Japanese say that one first eats with the eyes and the light lunch platters served included fresh local cheese, meat, salads and a lovely fresh fig were enough to entice even those who may not have been hungry. Many found good value in the shop’s local Olive products, preserves and the various country offerings that encourage on to open the wallet.

The scorching afternoon was ideal for a dip in a cool pool or a power nap before dinner. Yes, it would soon to time to partake of more Karoo delights. As the sun slipped down to cool the evening we crossed the street to the Real Food company who had laid on a buffet of tapas dishes from which to help yourself. Peter P and T had thoughtfully provided wine at the tables and an enjoyable evening was the result- especially for those who did not have to eat in a hurry to catch the Evita Bezuidenhout show. The show goers returned to find the second session still having lots of fun!

Whilst we left after breakfast on Sunday to get an early start before the heat of the day, the hotel car park was already all but empty as others must have thought the same. Not even the total of 6 Stop/Go’s on the road between De Rust and Oudtshoorn and between Oudtshoorn and the Outeniqua pass could spoil the lingering feeling of a great weekend away.  Thanks must go to our Chairman for his great organisation and unfailing attention to detail. 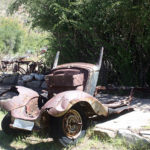 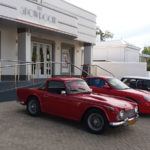 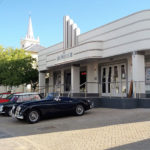 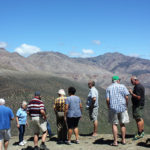 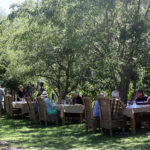 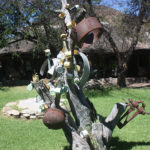 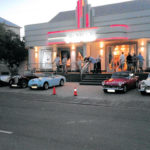 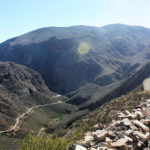 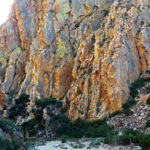 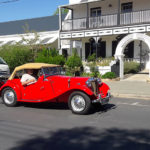 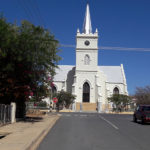 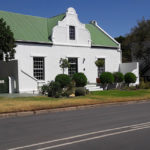 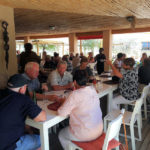 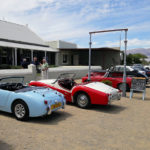 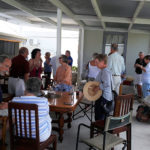 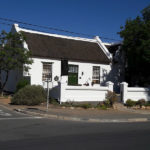 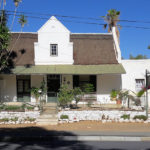 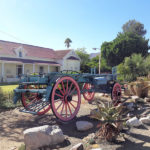